Since yesterday was the first day of Spring, we’re celebrating with this interview with Sandra Dieckmann, the creator of Leaf and The Dog That Ate the World. Both of these gorgeous books are available wherever you buy your books. Read on to discover how Sandra was inspired to turn a dark season of her life into a tale of resolve and strength in The Dog That Ate the World. 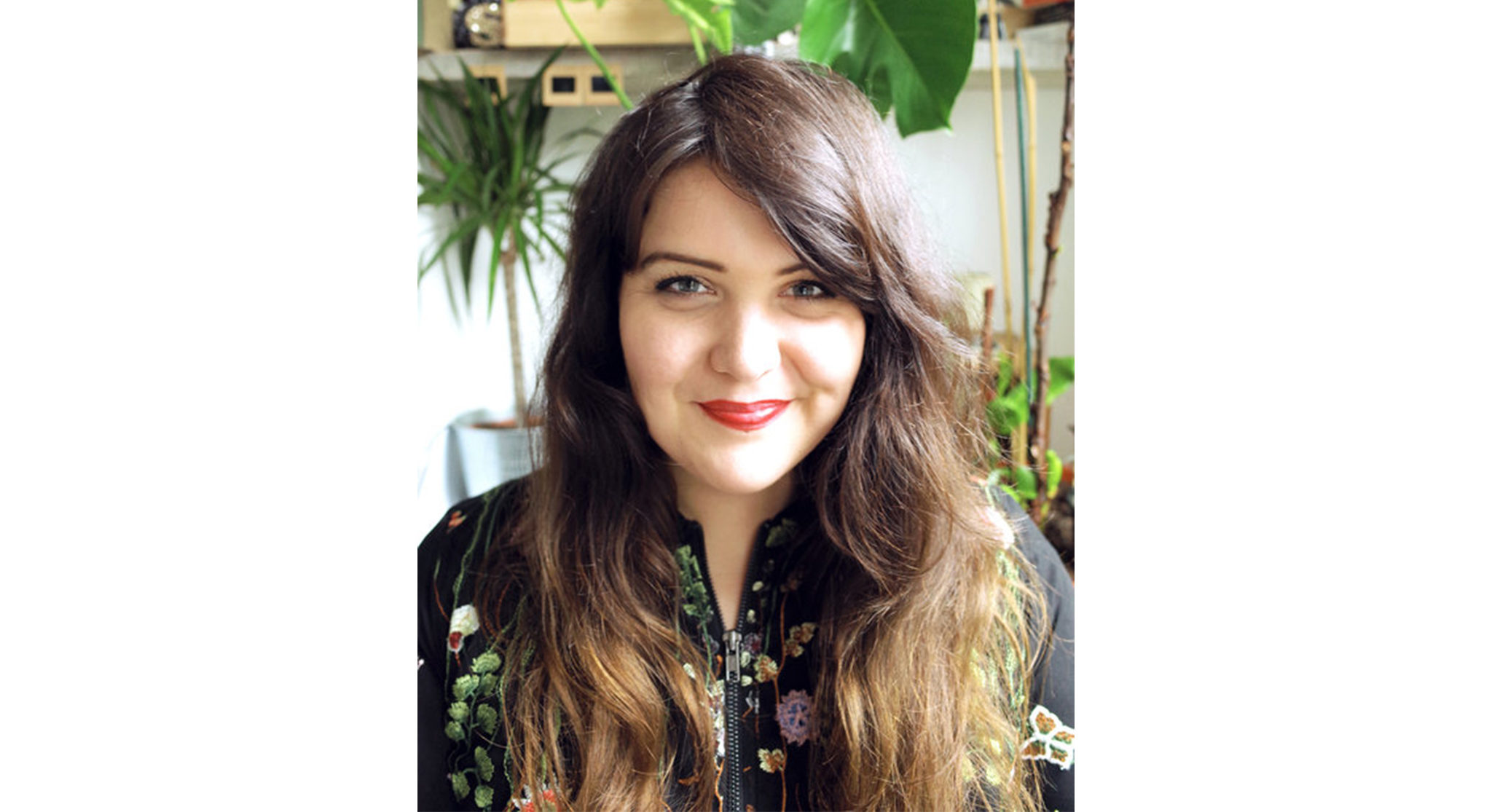 The first time I thought of the story for The Dog That Ate The World I was lying under a tree in a park near my house watching the sunshine come through the tree branches above, celebrating being alive and warm. It was all roughly there, beginning to end. I don’t think it could have formed as a story in my mind if I hadn’t gone through a particularly dark time beforehand. ​I struggled through crippling anxiety and health problems for many months and connected that day to the the saying that “depression is a big black dog.” I imagined it swallowing the sun and everything alive, but that I would come out the other side stronger than before.
I thought about the power we give to thoughts that are counterproductive and destructive and shared a little sketch of handing the dog a flower. I wrote: ​”If the big black dog comes to bother you don’t fight him, invite him! He’ll soon become much smaller even if he never leaves your side.”

In the book the dog disappears through taking everything in existence but mainly also because no one gives him any power by thinking about him or physically fighting him.

2.​ ​What and who in your life inspired the different characters and the overall arch of the story about building community in the wake of intense greed?

The Dog The Ate The World is a cyclical story of a community that lives peacefully, but is  segregated into different groups of animals, until one day the dog appears in their valley. He  swallows everything and everyone and does not stop, while growing to incredible proportions.  The animals must band together and rebuild their lives. There is music when words fail, growing together as friends and rebuilding lives in uncertain times. It’s a story of rebirth and  dark and light. 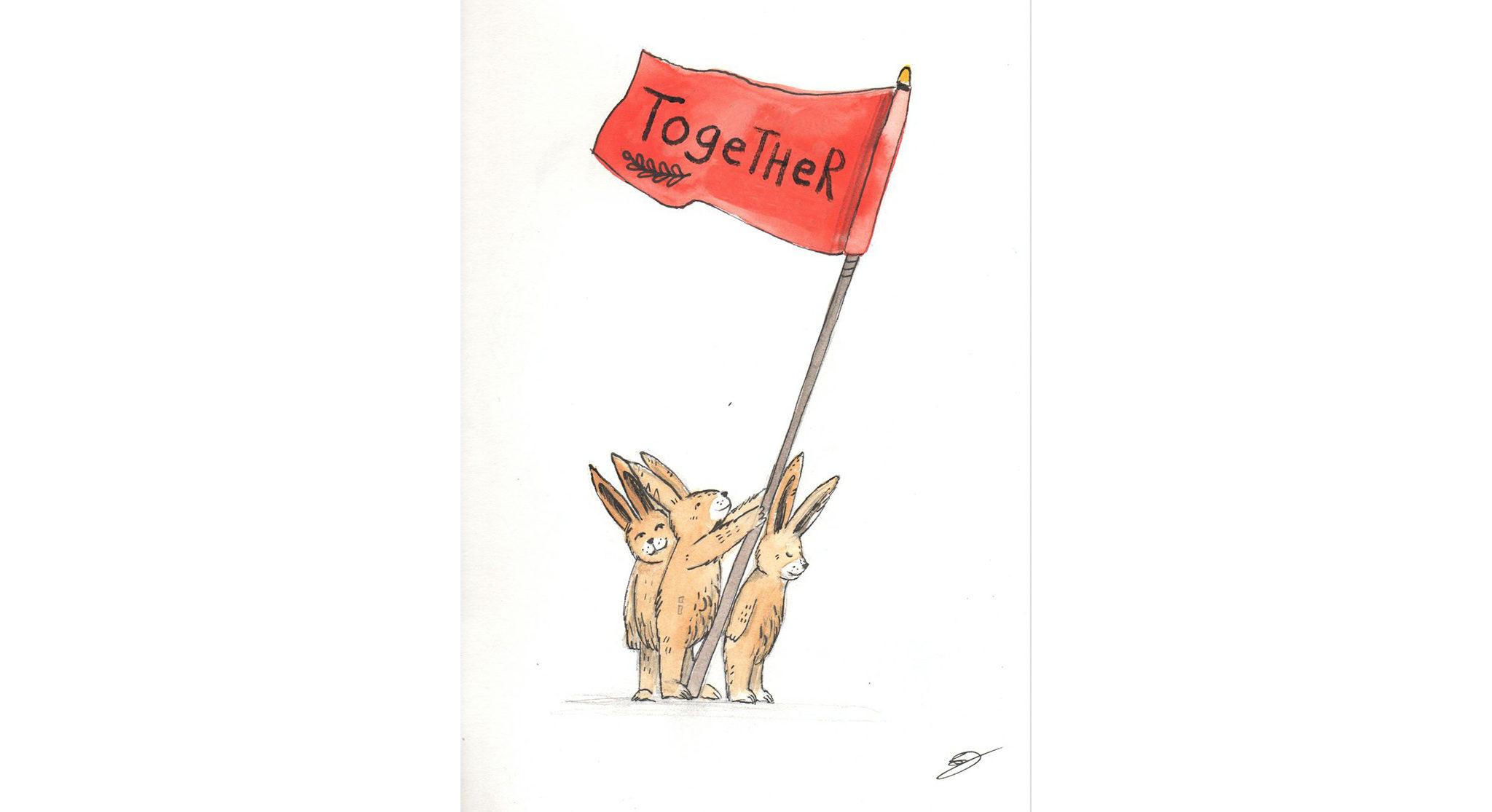 In a big way it’s the story of the world we live in. It is not a classic hero story where good defeats evil, but it is a story about overcoming darkness by living well and also about balance.  The dog eats and eats without being satiated, which brought up the theme of blind consumerism. In my eyes it is also about the strength we all carry inside to make the best of a  bad situation: be it a mental health crisis or living under a disagreeable government. The children of the world (the bunnies in my book) are faced with an incredible threat but respond peacefully. ​These characters were inspired by an early sketch I had made responding on the current political climate in the UK around the Brexit Vote. The calm, wise fox leads with little words and speaks through his music to pull the community together. He is the pillar of the animals in the valley and gets swallowed first by the dog, making everyone spring into action. Hans Christian Andersen said it best: “​Where words fail, music speaks.” 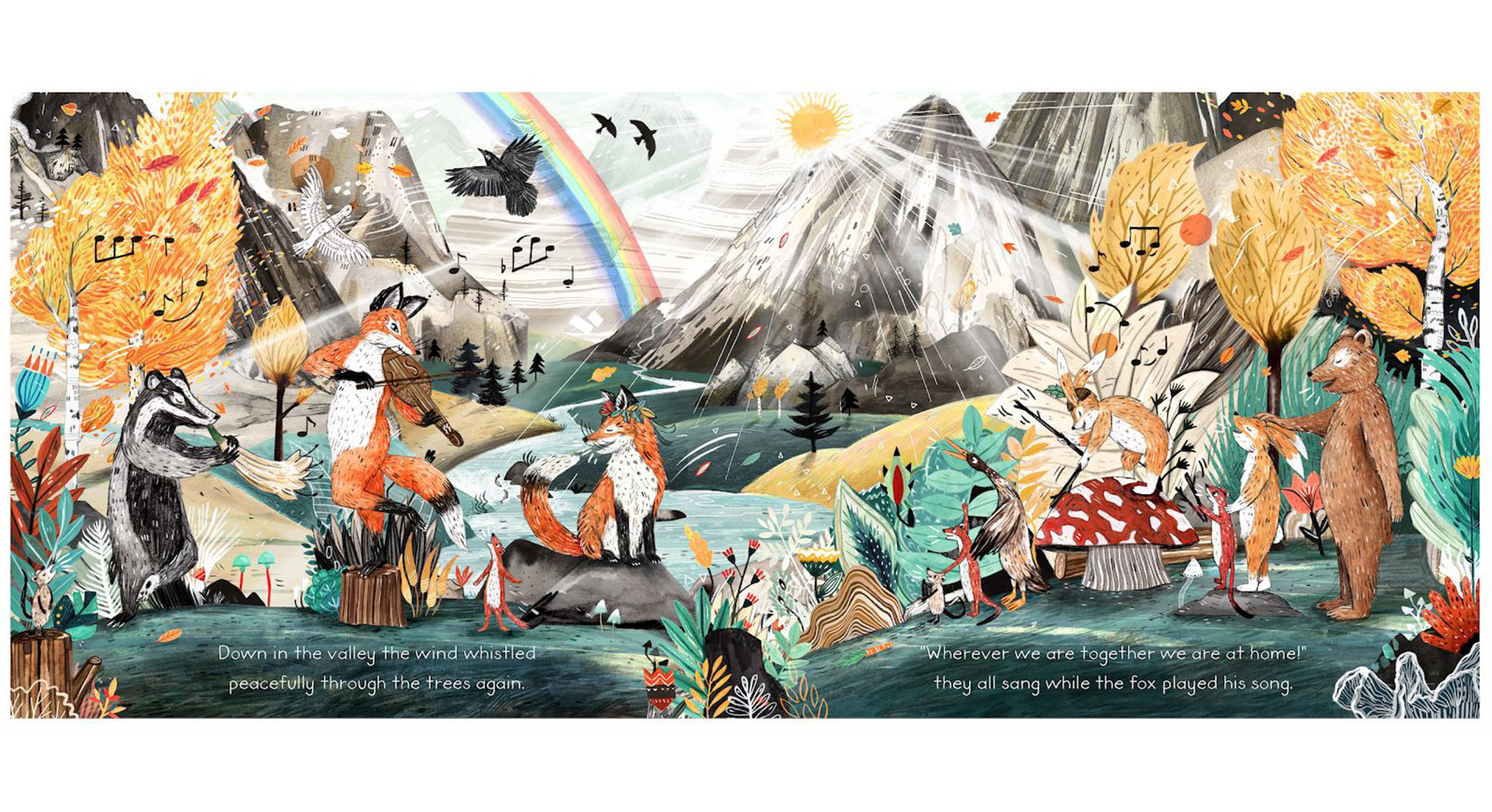 The other characters I imagine all have their roles in the community and help rebuild it together, even though they lived very separate before this difficult time. The ferrets are silly and fun, the badger is the support system, etc. and all together they form a brilliant band. They dance by fire light and get on with living a good life. Hopefully everyone will find a different angle on this story. You will also notice a lot of mushrooms. It’a a surreal fable so you know…

3.​ ​After the success of ​Leaf​, how did you feel putting together your second book? Was your process any different?

The Dog That Ate The World is more of a concept book than Leaf. Leaf grew together out of different stories and that was a marked difference between the two in the beginning. It was a little daunting to follow Leaf so soon after but also freeing in a weird way as I had been really pleased with the response to my debut, and I felt like I could try something a little different. The Dog That Ate The Word is a story very close to my own heart and in ​my mind this book looked darker, far too dark for a picture book so we worked really hard on balancing the dark and the light without losing my vision. 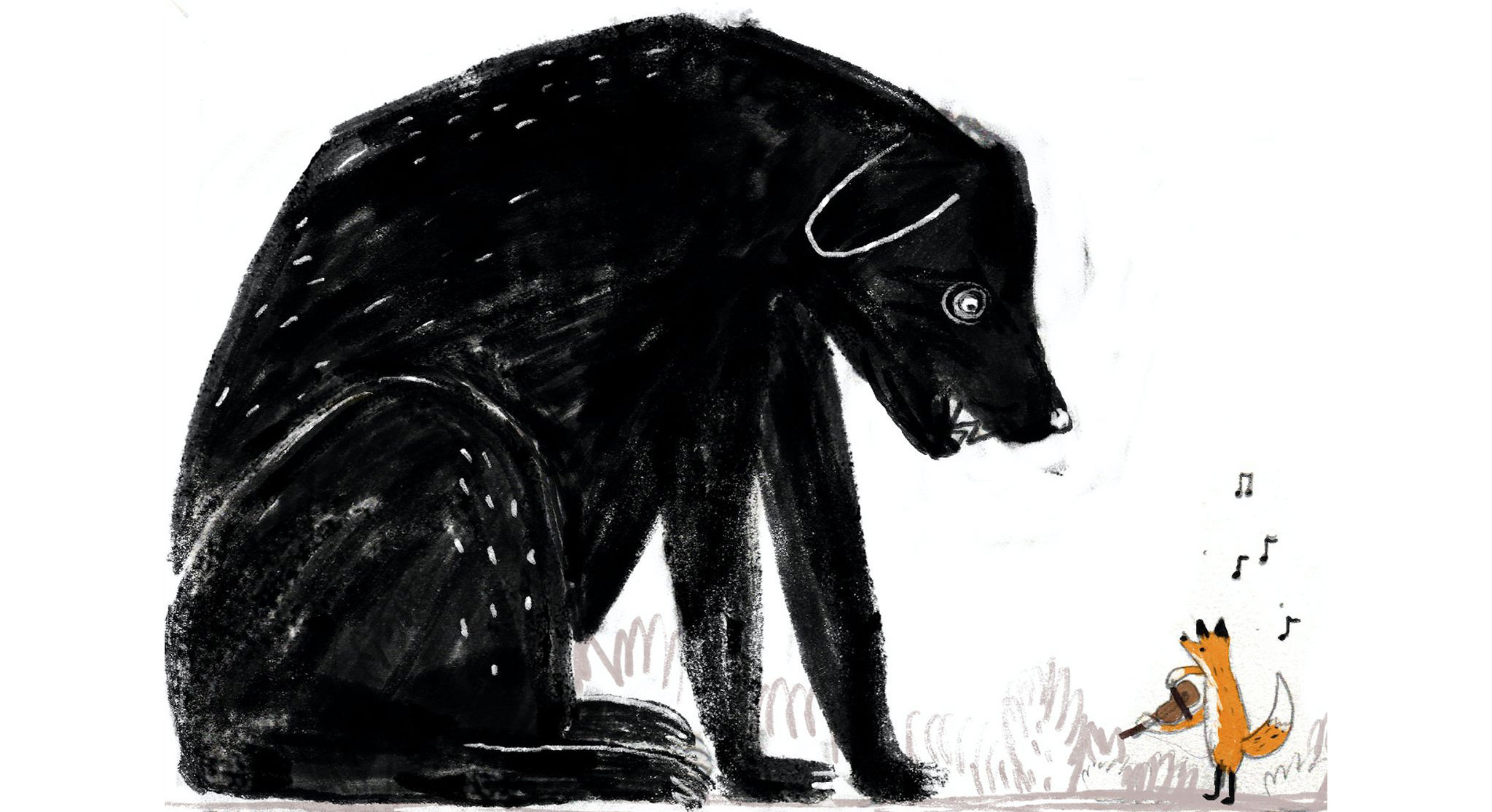 My brilliant editor Harriet was imperative in this task. I initially also thought about trying to work with simpler shapes and less detail but my usual way of working in detail automatically crept back in. In early idea sketches and roughs the dog was a very flat, black shape and the idea was to have him grow throughout the twelve spreads until he disappears when he has consumed everything. This we kept as a visual tool. In an early version of the story the dog swallows the mountains too which break his teeth. He started off looking quite silly but we later decided to make him more wolf-like.

4.​ ​What’s your ideal drawing space and what kind of snacks/beverages does it include?

My dream studio would be a light space filled with plants, big windows, and french doors leading into a garden which ends at a stream or lake. That would be bliss. I have worked in a shared studio for many years now with different illustrator friends and that has always been pretty ideal. My workplace, Studio Mama Wolf moved venue several times. Once we even had a studio/shop open to the public. That was especially good when we had short dance sessions to loosen up and laugh together and stuffed ourselves with morsels we had brought in to share. Space and food has always been best shared! 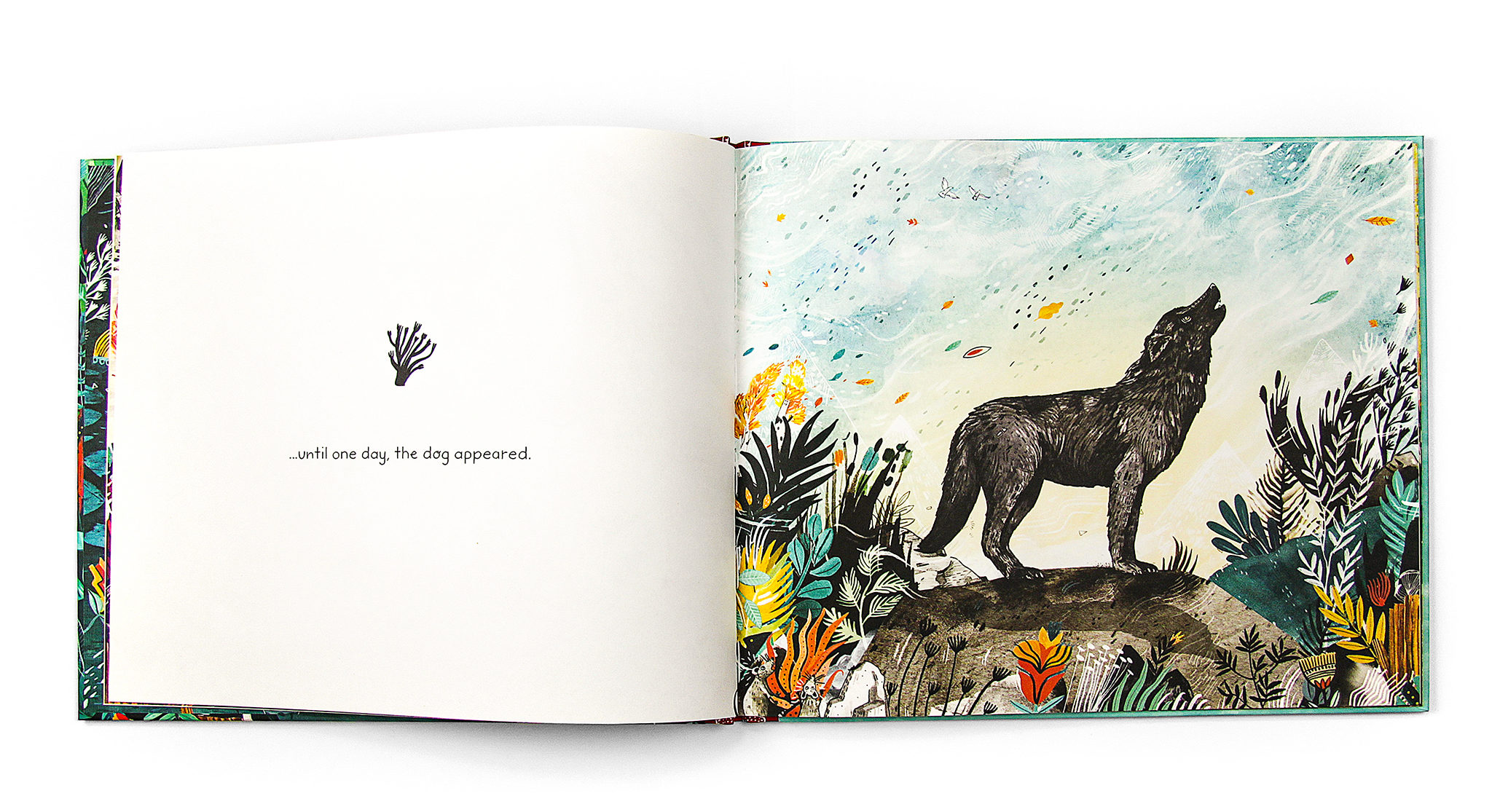 5.​ ​When did you start creating illustrations? What has kept you going?

I went full time as a freelance illustrator in 2012. Before that I mostly illustrated nights and days off ​for a couple of years, ​​while I worked part time and built up my contacts and portfolio. Etsy was a big part of getting established, and my shop there has always been busy and a lifeline in supporting myself as an independent artist.​ ​I have always been in love with drawing from a very early age and still have paintings I did when I was four years old. When I was young I explored the countryside and forest in rural Germany as I wasn’t allowed to watch more than an hour of telly a day, spent loads of time reading, drawing and making things, and in the end just never stopped. I think at every stage of my life drawing has been my soul’s soothing balm.It’s been my retreat, my way to communicate feelings and cope with life in general (apart from crazy deadlines of course). 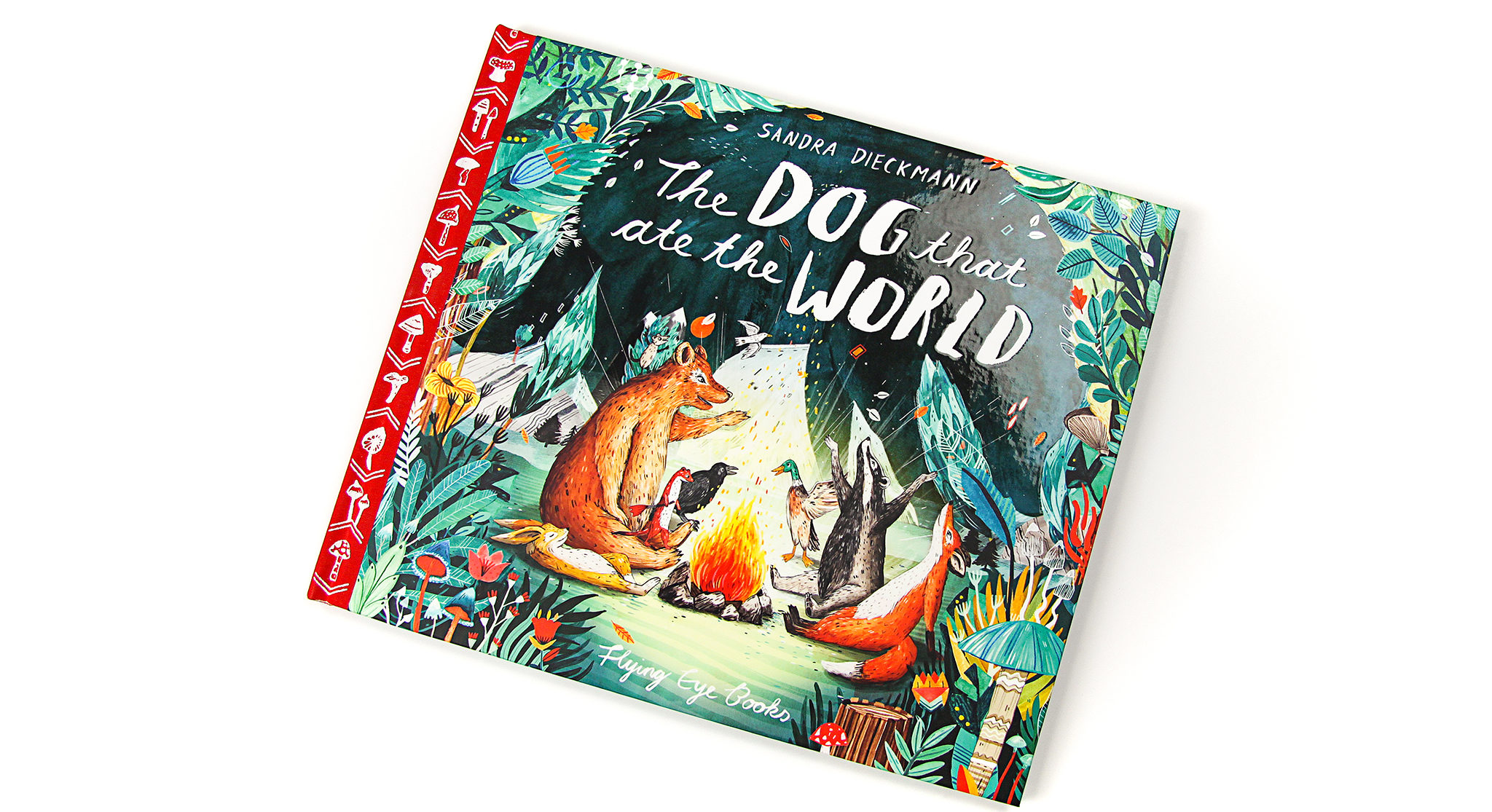