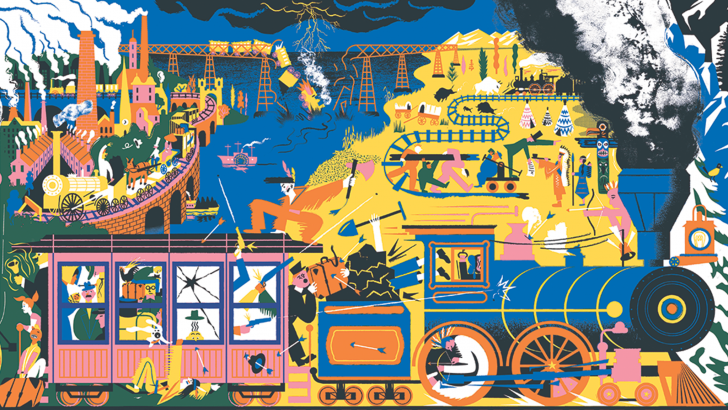 Berlin-based couple and illustration duo Daniel Dolz and Doris Freigofas – AKA Golden Cosmos – are back with a brand new Leporello in their distinctive, colourful style! Having taken us flying high through the sky with a history of aviation in High Times, they are now bringing us back down to earth with Locomotion: a beautiful and factual guide to the history of train engineering and travel. 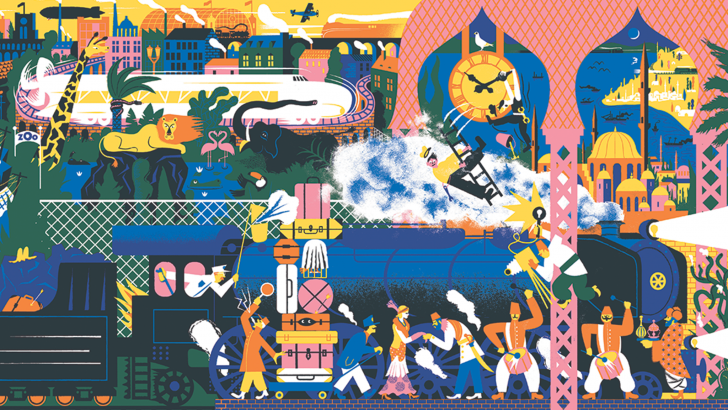 To coincide with the release of Locomotion, they took a little time to answer some questions for us:

The history of trains is really diverse and we had fun going through the years, always being excited about what was to come next. The early beginnings of trains with the first steam machines and all the adventurous experiments like the Rainhill Trials were particularly fun to draw, especially visualising the sounds, the smell, but also the grace of those monstrous, heavy locomotives. 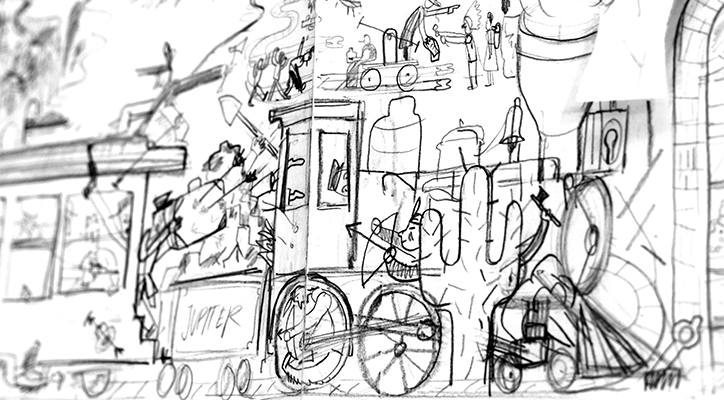 We’re both involved in the whole process, but we’ve started to allocate work. We’re not working on the same illustration at the same time.

For Locomotion, Daniel was making the major part of the illustrations while Doris was involved in the sketching process and idea generation. This was because our second child was born in the middle of it!

We were really amazed by the fact that on the Canadian Pacific Railway there are cargo trains that are four kilometres long and need 13 engines to conquer the Rocky Mountains!

And of course we had to include some crazy inventions like the Rail Zeppelin – a train that looked like a Zeppelin on rails, driven by a propeller! This train only had one maiden voyage from Hamburg to Berlin and set a speed record at that time. 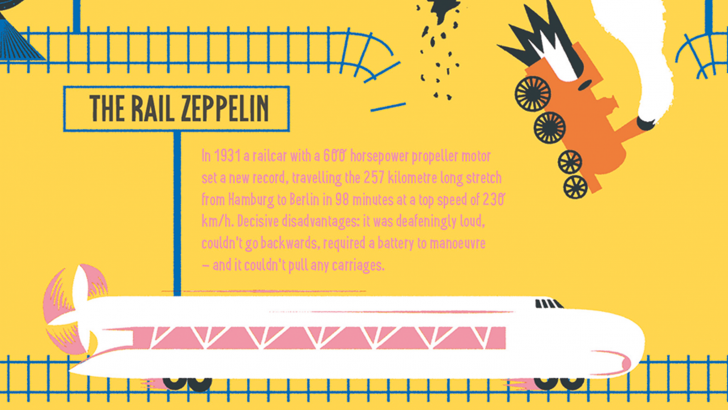 Actually we’ve been thinking of buying some old farmhouse and moving to the countryside. There’s this part of us that would like to be closer to nature and be far from the fast pace of the city. But we would quickly miss all the things that are so special about Berlin: the great diversity of lifestyles, the tolerance in views of live, the tasty and affordable food, the barbeques with friends on the balcony, going to see an exhibition on a Sunday afternoon and wandering over to the flea market by the canal afterwards… On the one hand, you can always discover new things in Berlin, the city is changing so fast. On the other hand, there are places that haven’t changed much since we’ve moved here 12 years ago. This continuity makes this place our home. 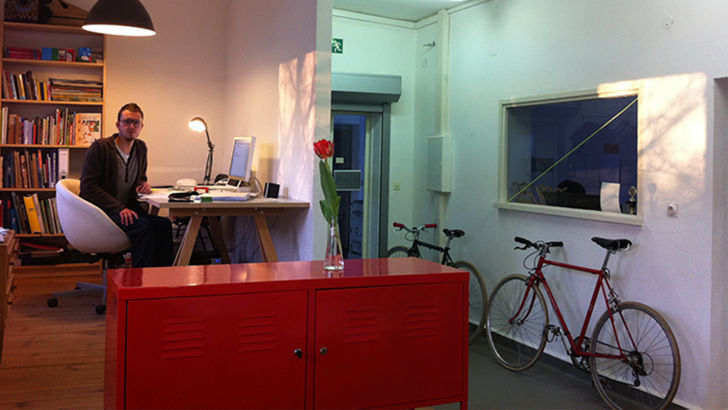 Our studio is located in a former Kindergarten in Lichtenberg, a part of Berlin that is becoming more and more interesting to young people and creatives as it’s become hard to find affordable space in Neukölln or Kreuzberg. The house is shared by around 25 creatives, artists, designers and photographers. There is also a huge garden where we grow vegetables in the summer. 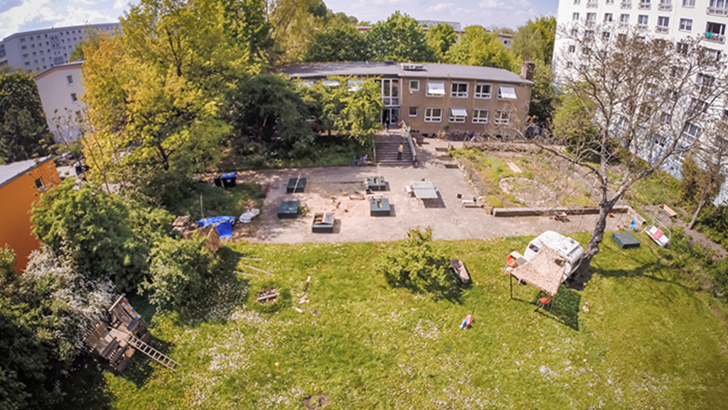 The Bauhaus is an inexhaustible source of inspiration for us. The Bauhaus philosophy is interdisciplinary and so comprehensive! It’s not just the graphic work that inspires us. For example, we’ve just recently come across a collection of hand puppets that Paul Klee made out of everyday objects for his children. 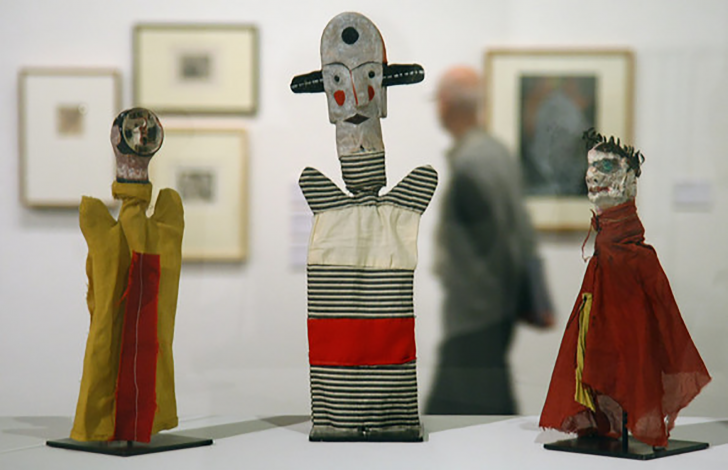 We also love the work of Christoph Niemann. His illustrations are so humorous and pointed. He likes to experiment stylistically so he always surprises you. Last year we discovered the work of Cynthia Kittler and totally fell in love with her style and ideas. She is part of the PARALLEL UNIVERSE COLLECTIVE, a group of six amazing artists from New York, Berlin and Hamburg.

Thanks so much to Doris & Daniel! Locomotion is available to buy now HERE and in all great bookshops! 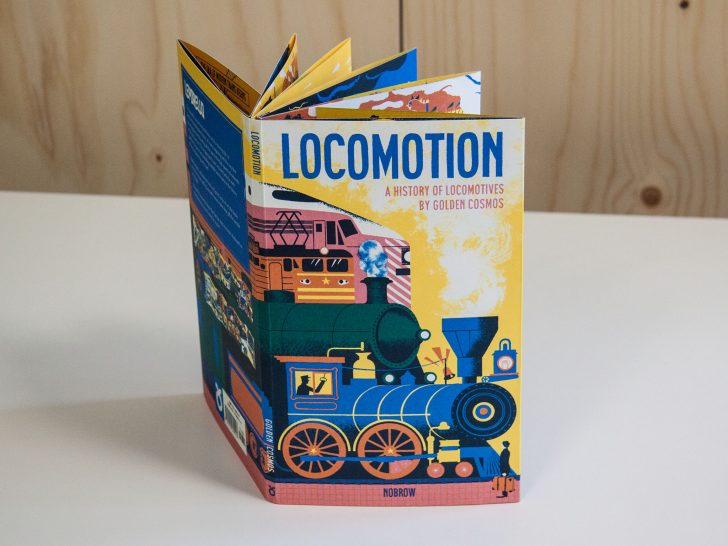