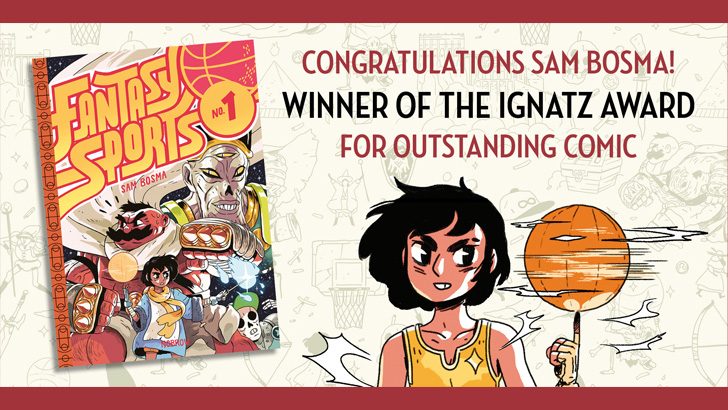 A very big congratulations to our friend Sam Bosma on his incredible win at the Ignatz Awards this past weekend at SPX!

Fantasy Sports No. 1 won the Ignatz Award for Outstanding Comic, and we couldn’t be more excited!

“The Ignatz Award, named for the character in the classic comic strip Krazy Kat by George Herriman, is the festival prize of the Small Press Expo, that since 1997 has recognized outstanding achievement in comics and cartooning. The Ignatz recognizes exceptional work that challenges popular notions of what comics can achieve, both as an art form and as a means of personal expression.”

Sam was nominated along with some genuine giants of comics– Melanie Gillman, John Martz, Daniel Clowes, and Kim Deitch. Congratulations to all the nominees, a big thanks to the folks at SPX and the Ignatz Awards Jury for counting Fantasy Sports among the outstanding comics of the year, and an extra special thanks to all of the attendees who threw in their vote for Fantasy Sports!